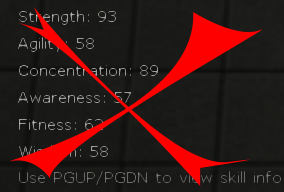 Master Sword Classic's stat system had a complex middle man that gave the illusion the system was more complicated than it was. The prestidigitation involved having each weapon stat add a different amount to each of six stats (Strength, Fitness, etc), and those in turn were boiled down into the core stats: maximum HP, Mana, Stamina, and Weight.

The new system relies on race, faction, and title to determine those core stats, so the middle man of those six is no longer required.

Weight is to be removed as an inventory limiter, and the bar instead used for dynamic cool downs.

Similarly, Power, Balance, and Proficiency are to be rolled up into the core weapon skills. Balance is no longer a factor with the miss chance removed, Proficiency isn't an issue with the narrower power levels, nor is "twinking" in general much of an issue. Some magical powers require a certain Mana pool or Faction reputation, but beyond that, any character can wield any weapon.

Intent would be to use the same space on the "character sheet" for other purposes, such as Title, Faction Balance, Armor, and Training Points (which allow you to increase a weapon skill of your choosing or invest in Titles the character qualifies for).

Alternatively, we can keep them there to continue to provide the illusion that the system is more sophisticated than it is and retain traditional RPG stats, though they will have little to no direct affect on game play, as was the case in Master Sword Classic.

Other options can be discussed, though keep in mind the primary effort is to start on a simple and solid foundation as is possible.
J

Location
You are here --> X

I'm all for as simple as possible, but as complicated as necessary. The stats should be concise to the gameplay they convey.

Intro
Player picks character race and gender (this can't be changed after creation), race would have different starting stats based on each race, with each of them having some benefits towards some playstyles (these benefits should be minor, like extra xp towards specific skills when leveling up). Examples:
-Dwarves prefering blunts/axes/shields for meele weapons/gear, prefering earth/fire elements. Interest in smithing non magical gear/alchemy.
-Elves prefering polearms/archery/throwables, along with wind/ice elements. Interest in crafting spells or magical gear.
-Humans prefering daggers/MA/two handed items, along with affliction/lightning elements. Interest in creating non metal gear and potion crafting.
Swords would have no benefits from race traits due to the name of this mod.

Part 1
Keep the stats (rename wisdom with intellect), let the player distribute stat points early on, which are used to define initial player class based on highest 2 stats. If all are equal or close to each other, then the game should assume jack of all trades, where the player is slightly better than average with any class. Say jack of trades does 80% of what a class focused character should do in terms of utility or effectiveness. A class focused character should do 66% when performing any other skill that isn't related to the core class. Should do 100% effectiveness with other similar options and 125% with the focused one.

With this in mind, the player would have to create a class early on based on the 2 highest stats or having all of them relatively close to become a proper jack of all trades. (eg: intellect and concentration would force the player to become a mage)


Part 2
At some point, the player should further specify the role by going in depth within the class and focusing towards a specific path. This is where proficiency/power/balance/wisdom and whatever else could be used to pinpoint your interests based on what you picked in part 1. Let's assume we only get these 4 stats to pick our path within the class system, if a mage player focuses in power and balance, they would become an elemental mage (a mage that focuses towards basic elements). Essentially this is like a subclass system. Perhaps any combination of 3 stats out of these 4 creates a specific subclass, with the option of focusing in 1, 2 or 3 stats. With the 4th always "lacking" some points. These 4 stats would change based on your class. A meele oriented class should have something like proficiency/power/defense/mobility.

Skill levels should still be a thing and it should act as a tier based system to unlock further upgrades for your class/subclass. You could level any skill with any class or subclass, but would suffer penalties as mentioned in the first paragraph from part 1.

Players should be free to change any class/subclass as they see fit perhaps have minor costs for changing subclass focus and having more expensive costs for class change. Race/gender should be locked to a one time choice.


Part 3
I do think that "jobs" should be worked into the game. Things like:
-alchemy
-smithing
-herblore (potion crafting)
-crafting (creation of non metal gear)
-spellcrafting
-enchantment (modifying gear with magical properties)

Jobs would be accessible to all races, with small benefits based on each race. Again, benefits should be small, like extra tidbit xp for performing a task related to the job. These jobs would level up as the player created things along the way. Some jobs being harder to accomplish than others while also giving lots more xp per task, to more or less create "balance". These jobs could also end up being ways of making coin later ingame. Creating items and selling in the market for some coin. Like selling skins right now in ms:c, you could use those skins to craft gear and sell the gear for a higher value in the market.

As you would get better with doing tasks for each job, you would unlock higher tiers of content to create.


Final
Combat skills, all skill level ups related to the class you picked to start with. Should give stat points when leveling up. These stat points could potentially be the stat points used in part 2. With more points being unlocked through quests and whatnot. All classes should have the same amount of points to use.

While I wouldn't expect anything so elaborate in an initial release, where we're trying to keep things as simple as possible, a crafting system of sorts was on the table, though it may disappoint, and boil down to opening markets by turning in X amount of Ore Y. It would at least allow the making of "ore rich" maps, so that quests wouldn't be the only motivation to visit random maps, and it might be more useful than randomized treasure chests on the more "free roam" oriented maps.

Though I do find it somewhat interesting that you wish to replace "wisdom" with "intellect" when those are two entirely different faculties.

Balance could affect critical hit chance and stamina costs
You must log in or register to reply here.