The Death and Rebirth of Master Sword: Continued

(Part One of Three)​

[Before we deal with MSC, we have to deal with you.]​

[You are the cause of MSC’s demise.]​

Not... Something I would be proud of.​

[Torkalath: And that’s the problem.]​

[Torkalath: You are weak, in the wrong ways.]
[Felewyn: You lack discipline, and have been found wanting.]
[Urdual: You are out of sync with your bliss.]

[Rhudeanlorat: I got mine, and I fled to petrification.]
[Aeldorandorat: “You enslaved me to the elves.”]
[Jaminporlants: It’s not a terrible life, always on the run.]
[Kharaztorant: You know where my own will get me.]​

[Urdual: We’ve seen this world’s end.]
[Torkalath: Some tasks are beyond mortal means.]
[Felewyn: Certainly, beyond yours.]
[Pathos: The path you walk, has come to an end.]​

The problem, is paradox, to one such as me. But there is no other.​

[Torkalath: And whose fault do you think that is?]​

[Felewyn: No potential was great enough for you.]​

I am prideful and wanting.​

[Urdual: Who would you sentence to your thread’s path?]

[Pathos: When one door closes, another opens.]

(@Thothie is consigned to offtopic and the archives.)
​
(Tomorrow, Part Two: The Parade of Dragons...)​

[Torkalath: Now that’s out of the way, it’s time to begin the arduous task of turning a world of mistakes into something useful.]

[Felewyn: You say that as if learning is a mistake.]​

[Torkalath: I meant to imply no such thing, and you know it.]

[Torkalath: You shall be the fire at the heart of the new world. The volcano that brings the lightning of the sky to the ground.]​

[Pathos: Do you want to make such a claim, in my presence?]

[Urdual: You shall be the greed of growth in the new world, of body and cancer alike, the hybrid of mutation and evolution.]

[Felewyn: You should not be.]

[Pathos: You are the silent darkness that devours the sun and brings out the stars that reflect upon your black skin. You are death of the illusion of life and the cycle of souls that sores throughout the night sky.]

[Urdual : Freed to be nothing.]

[Felewyn: You are the blinding unity of all, whose light confounds all that look too deeply upon your crystal scales. You are birth unbound by chains of ego, incomprehensible to mortal minds.]

[Torkalath: As our father knows, some things are beyond words.]

(Part three of three)​
Let me stretch my wings here a bit... Ah yes, that’s better... Where to start... The Loreldians, I suppose:

The powers of the Loreldians are virtually limitless, save when it comes to one another.

As there are only four, may their children grow to be the fifth, for the sake of us Dragons.
We will make sure of it, whether it is by the Triad’s will, or against it, such is the task they’ve given us with the time we have remaining - “by any means we deem necessary”. We are not merciful creatures, particularly with our continued existence on the line and the will of the gods behind us.

@Aeldorandorat, if you would be so kind as to supply us with some imagery... 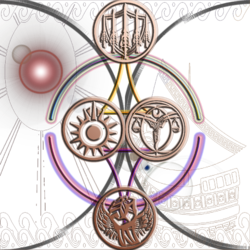 The First World: A boat that could barely leave the shore. A broken wheel with no flow and no direction but eternal order in eternal defiance of chaos. 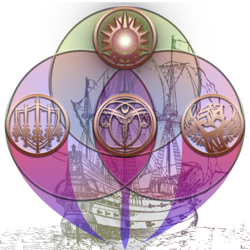 The Second World: A galleon of concordinate intellectualism in opposition of death, but no passion nor desire to drive it nor keep it steady, save that which was placed into it, as it forever fled its inevitable demise. 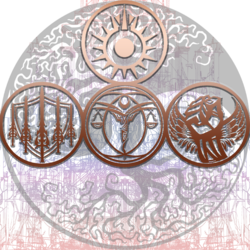 The Third World, carrying the forgotten as asset, but alas, it failed to float before the tide returned.

Aeldorandorat, that’s just... *sigh* The Fourth World, born from the pain of that loss.​
As that last is just too much to take in at once, let’s start with the center layer: 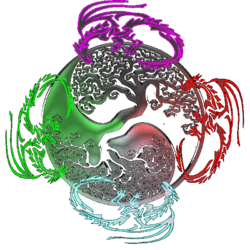 Cycles of time are nothing new in this now flat world, but this cycle, has a will of its own. 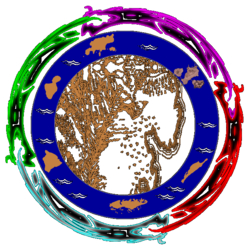 The world is flat and concentric, spiritually speaking, with different times in different places, based on the distance from the center. In this Era of Man, Deralia is the center of the world. 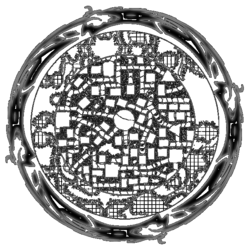 The dwarves have their place in the foundations, as Kharaztorant drives their stone like stagnation to action. 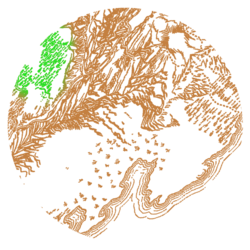 The elves are consigned to their high forests in the north west, for their transgressions against man and the machine of the world, under Aeldorandorat’s watchful gaze. 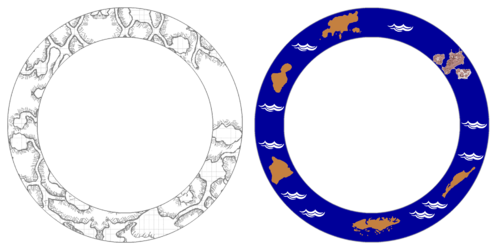 The outlands and islands, above and below, have time and laws of their own, not yet settled by the ruthless clock-towers of civilization.

Beyond the rim, as well as where the machine is weakest due to disharmony, within and without, the miasma of The Lost pours through, mixing with the world to create the savage, the demonic, and the restless dead, as it always has. But it too, is part of the design, as am I.

That design is to unite, refine, improve, then to divide, and conquer, to rinse and repeat, until all lesser metals are honed to the finest of iron, and the wheel grinds to a halt, and collapses again on itself, only to explode to collapse again, with each cycle of time leaving twinkling scars in memory and in the night sky above. Each iteration, grander than the last, until a solution is found, throughout the ages of dwarf, elf, and man, and those in-between.

The oppressed shall become the oppressors, it is inevitable as the tides.
But just as inevitably, the tide shall always be harnessed as it is opposed.

So say the Dragons of this new fourth Leann.

Now, as to how “game play” will differ, that’s for another thread where the polls begin...
...but first, the beginning of the forum rearrangement.