The True Followers of the Lost
Crusaders
RiP
MSR Developer

Location
U S A

You can't edit HL1 maps in the source editor :?

Possibly... Would need to snag it in some usable format. 3dsmax tends to be proprietary.

I do have permission for this: 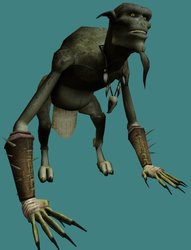 Which is probably actually higher poly. Still hoping one of our scripters in training will try to do something with it.

You can, but it's tricky to setup, and ultimately, very screwy - not to mention unstable. You also can't use objects that don't work with the Goldsrc map format - such as spheres. Terrain deformations are just ignored, but a torus or sphere will crash the compiler outright, in addition to making the map unloadable in the older hammer.


Srgnt Rehab said:
yeah... so the map is being delayed due to technical issues. As in Hammer doesn't start. [...] I click run (default as administrator) and it waits 3 seconds and says that Valve Hammer Editor has stopped working and gives the usual 3 options of check online, close, or debug.
Click to expand...

Assuming you've not changed your graphic drivers recently, it's probably an invalid wad setup - either too many, too large, or one it doesn't like. Sadly, since there's no hammer.ini, this means diving into the registry to fix it. Use regedit to search for one of the wads you have loaded (likely "allinone.wad") until you find a list of them prefixed with "TextureFileXX" (likely in key "Valve Hammer Editor/General". Remove them all (deleting the whole key set is also an option). Moving the Hammer.exe to another location and running it again may also reset its configuration, forcing an s-ID change.

Theres some 3dmax plugins that let you import/export SMD files.

EDIT: done, ill see if i can rig it to some skeleton later.
You must log in or register to reply here.

MS 1.35 Mapping Tutorial and Reference (with notes for MSC)
2