Hey everybody, I just passed my 70 hour marker (yes I keep track) on hunderswamp, it looks pretty cool. I'm curious if anyone has animated models that could be turned into unique mobs for this zone. I'm not really sure what all would work in your opinions, but here is what I'm using so far:
Zombies
Skeletons
Dewmshrubs
Eye Lazor worms *The new ones*
Spiders *Maybe*

What didn't make my list:
Dragon flies - due to exploits
Shambler - due to a request
And everything that doesn't make sense in a swamp...


This is awefully non-specific and I apologize for that, but any help will be greatly appreciated. Also, it might be useful to keep in mind that this map is completely intended to be a freeroam, similar to thornlands or daragoth meaning open areas with respawning random enemies with many directions to run around and explore.

I can probably re-rig the dragon flies to be non-sploity for your map. Maybe finish up that dragonfly queen script...

Had plans to bring in the tiger-skin loin cloth orcs in there - hence providing platform models for which to mount archers on. 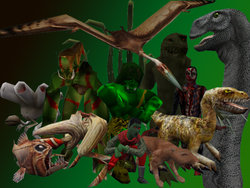 ^ Lots of models stolen from Gunslinger chronicles up for grabs in here. Coulda kinda do without the dinosaurs, I suppose, but the trencher-beak (third from left bottom) and the tube (far left bottom) would likely fit in well.

Whatever you do, don't add "dewmshrubs" in the map. Imo they are probably the only annoying thing in your list and they are usually worthless.

Following both of your ideas, i would prefer seeing this:

-zombies(humans and elves, possibly orcs too);
-skeletons;
-swamp worms;
-spiders (sure why not, why not make a new type of swamp spiders that are bigger than the other ones?);
-beetles;
-swamp ogres;
-dragon flies (i agree with this, i agree even more if Thothie actually did the queen dragonfly script);
-shamblers or swamp orcs (like the ones shown in thothie's image, could be related to leftover borsh orcs who remained there);
-a necromancer in this map? (might need to explain what is controlling all the undeads in the area other than the swampwater...)
(EDIT)- maybe a new type of swamp plant that grabs players and makes them stuck or even slows them down while leeching their life? This is just to replace the dewmshrubs slot, really.

Personally I would suggest using a mummy with swamp-like texture instead of the shambler, with some small model additions and textures It could turn into a moss filled swamp creature.
J

FER said:
Personally I would suggest using a mummy
Click to expand...

Accidental Dridje Edit: Yeah, I'd like to stay away from the mummies for a while too.

I still need to make flying mummies for Idemark's Tower.

We've got a kinda slimy zombie behind the raptor there - has webbed hands and feet, IIRC.

"Personally I would suggest using a mummy MODEL with swamp-like texture instead of the shambler, with some small model additions and textures It could turn into a moss filled swamp creature."

Do I make miself more clear with this? besides, the shambler has zombie animations which are not that different from the mummie's.
I was just trying to find something more nice to the eye than that piece of crap.

Why NOT dewmshrubs? they seem pretty decent =/

Yeah, easy enough to make them have no collision boxes script side... Only downside is you won't be able to shoot them down... It wouldn't be a big deal on a mid-high level map though, as you aren't going to be trying to train archery on them, and you'll have other ranged options at your disposal (eg. Fireball would work just fine).

Plan for the queen was to have her orbit her spawn point, summoning little ones. Sticky bit was actually getting her to orbit.

I've not heard people complain about dewm shrubs before - indeed, I got yelled at for taking most of them out of Joe!'s half of Deraliasewers - but I had to for stability reasons. I've since made a new version that shouldn't have as many stability issues, nor that weird repelling thing, and the various other minor issues that crop up with them.

FER's just talking about using the mummy animations for a new swamp-zombie. That'd be modeling work though - we kinda have a swamp zombie model ready to go. But if he wants to do it, having something original is always nice. Could aways drape green {moss textures with holes on them.

The Piranha model actually looks decent... I could use it for hunderswamp south (which will be a lot more wet than the north, due to the north containing almost all of the cave)

Thanks a ton for the quick support guys, I plan to have some screenshots up semi-soon... valve time.
T

In my opinion, with Hunder swamp being the epic lore map that it is, it would be a perfect opportunity to introduce powerful Wyrm monsters, preferably as an epic, optional boss. Where one might actually find a wyrm model is a different story, but maybe this is a good opportunity to look for one? Or maybe if someone skilled like FER feels up to it, make one?

Again, I want to put emphasis on the fact that Hunderswamp is an epic lore map and with all of the time mr.rehab has been putting into it, I predict it will look the part. With that in mind, it would be a major let down if the map did not have mobs that were of equally epic quality. Having the map populated primarily with models that we have seen thousands of times before, let alone allowing all out eyesores like the shambler in the map isn't really fair, in my opinion, when you consider all of the effort that is going in to this.

Of course, mustering up a bunch of high quality models isn't an overnight task by any means. However, from talking with srgnt rehab I know that he isn't even 50% done with this project yet because of the painstaking effort he is putting in to making the map visually appealing. This means that there is ample time to hunt down and/or create at least a small handful of epic mobs suited for maps like hunderswamp.

That is not to say that there should be no 'generic' models used whatsoever. Your run of the mill poison skeletons are a given for this map. If the mummy could be skinned to look like proper zombie with putrid skin and rotting flesh, it'd make an excellent addition. I also love the idea of a 'queen dragonfly' boss, too.

Mr. Rehab was my father.

No but seriously, a wyrm would be cool. The hard part is getting an animated model I'd assume. I would rather not have an half retarded looking wyrm that was stolen from warcraft or something though, that is my only request on that matter

Only wyrm models we have access to, not reserved for flightless dragons, are the dragons from Wizard Wars, and they look pretty pathetic.

It's not an "epic lore map" - it's just a map on the books - no real plans for any epic lore here and nothing terribly exciting ever happened here. That's not to discourage anyone from seeking to make it a quality map with original models, but at the same time, I don't want to see any mappers being scared away from it thinking it needs to be perfection incarnate.

Don't know if you already own it, or if it's legit.

This page contains some (more or less) useful models, but most of them seem to be ripped or stolen (even from MS:C)

Yeah a Wyrm is really cool 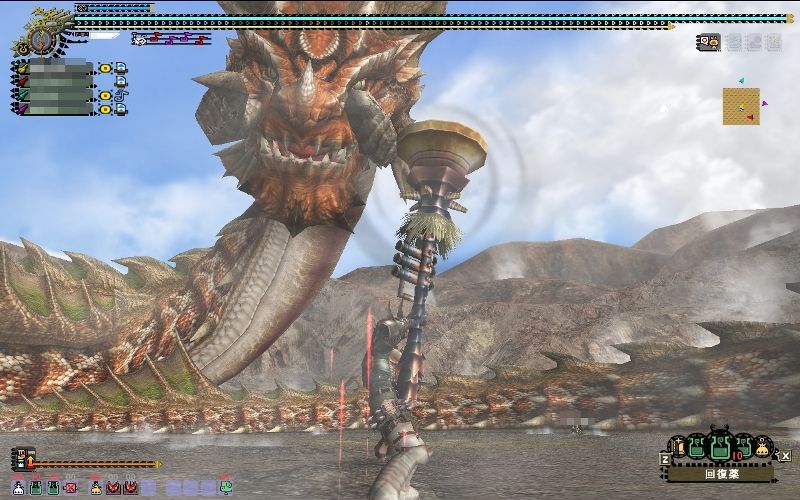 Even tough it was obvious, I couldnt figure Wyrm is a play on the word "worm"

FER said:
Even tough it was obvious, I couldnt figure Wyrm is a play on the word "worm"
Click to expand...

and something new to me ..
T

I was under the impression a wyrm was to a dragon what a donkey is to a stallion. Doesn't necessarily have to be a 'snake like' dragon.

But maybe that dragon model found by Hush would be better off used, far off in the future, for Lanethans green dragon whose name I cannot remember?

I was under the impression that the only difference between a wyrm and a wyvern is that wyverns fly and wyrms do not.

Although, it's probably different depending on the lore of the game/book/movie etc. In Final Fantasy XII, for example, Wyrms are not 'worm like' dragons but in other games or what have you they may be.

Wyrms probably can have legs or not, but what classifies them as such is a serpentine body, like a chinese dragon.

From what I can see, you have like the Knowledge about Dragons/Wyverns/Wyrms :
You must log in or register to reply here.

MS 1.35 Mapping Tutorial and Reference (with notes for MSC)
2