off topic but does msc use QC for anything besides the models?

Eh, sprites, though the syntax is a bit different. The engine doesn't use the QC itself, somuchas the compiler does.

too bad, i'm sure msc would be much easier to fix/update if more qc was used. my personal opinion that hl failed when removing it. (done with off-topic) lets see more orc stuff! =)

I wonder if it would be possible to eventually whip up emotions for player models as well. If the engine supports up to 4 controllers, then it seems fit to set them up in this manner:

Another idea, every model with this support could be used as a player model.


Bodygroups: Is there a way to get a full list of all the items/armor featured in the bodygroups?

Few problems with that - the most obvious being that the players don't have the eye-brow ridges of the orcs, and thus lack the ability to express themselves in this fashion. Less obvious is that there maybe issues getting that to propagate between clients - the waist controller auto-bends with the view angles, but that maybe engine side. I don't think the controllers work for player models the same as they do for others... Player models are always a bit funky, as the model doesn't exist on the client when in first person, and relaying the information that should be on it to the other players tends to be a funktastic process.

I wanted to add skins to the player model to make it more customizable, and maybe add some expressions, or red glowing eyes with dark energy contamination and such, but alas, skin changes on players won't propagate, and it took all of MiB's efforts just to get the submodels to propagate correctly - and even that be glitchy.


SpiritVII said:
Another idea, every model with this support could be used as a player model.
Click to expand...

Yeeeah, except all those custom weapon, armor, and sheath models, that are specific to the current player model's bone structure.


SpiritVII said:
Bodygroups: Is there a way to get a full list of all the items/armor featured in the bodygroups?
Click to expand...

On the player, or the orc?

The orcs should decompile alright - might be some texture skewing in the weapons though. I suppose I should link you the source again, seeing as how my host exploded:

Among the orcs, the submodel groups differ slightly by type, due to the potential for submodel group overflow. The Sorcs are the newest and have the widest range of both submodels and animations. (Which includes some extra social stuff, such as lounging, mugs of ale, etc.) 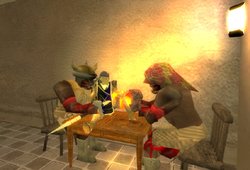 Code:
Thuldar's unique armor is on a separate model in that package "sorc_fer/thuldar.mdl"

Envenomed, Zombied, and Flaming are skins, rather than submodels, and are on the base orc model:

Code:
Seeing as how they'll be of no use, save in keeping the original order, here is, again, some of the artwork (symbols and such) used in those skins:
http://www.mediafire.com/?jqjm8sau23h8dk8


If you mean the player... Again, the player model is funky. The player model is under human/reference.mdl. If you open it up via JHLMV, you'll notice it's invisible until you set the submodels. The system basically has bits covered by armor set invisible - using visible male or female submodel parts for the exposed areas as required.

models/armor/packs/*.* //some of these no longer in use, not sure off hand
models/misc/p_misc.mdl


A few items in the models/weapons/ subfolders are still in use, but most are covered in these p_weapons models and in models/viewmodels - the idea being that everything should, eventually, be handled there, save crests, armor, and helms.

The orcs, for better or worse, don't have to deal with this complicated system of having all their weapons and armors in separate models - mostly because they don't have damn near a hundred of them to deal with.

This may or may not reflect what is happening in MS. I'll be doing some more investigation once I get the model set up for exports.

The custom Barney was probably ported from an NPC model, and it likely doesn't orient correctly in HLDM. (Though it may just orient differently, or if it's Svencoop, they may have an alternate system for that.) Again, not sure if this is handled code side or by the engine. Seems it *should* be handled code side, but Valve's decision making process, in that regards, is always haphazard. Not sure about the fifth controller though - it maybe you can have more than four.

[rant]Tis annoying that a dozen year old engine isn't open source, so we could just point to a custom exe. Hammer isn't open source either, and that'd open all sorts of possibilities. Folks have reverse engineered both Hammer and HL.exe, but the former I've never managed to get to run, and the latter isn't Steam compatible.[/rant]

The MSC player model seems to conform to the second set, various spinal bones used to orient with the player's view angles.

Incidentally, player models also have their axis set in their centers, rather than on the ground, which makes for some odd z+36 calculations every now and again.

Players are weird. Give me a monster any day.

To hell with an orc player model.

I want to be a giant, yo. A giant named Kanye. 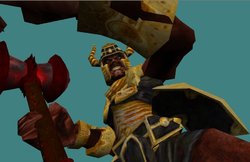 I'm still around, just had an external hard drive failure through the holidays and lost a lot of momentum. I see there's a contest underway..

that sucks... yeah we have a contest on going, let's hope a few more people get in now

You must log in or register to reply here.