I was experimenting on something else and wanted to test a few things, I accidently started working on a new model (that could possibly replace the dark staff model?)

No matter from which angle you look at the pieces, they are always 'in space'.
I also have a red moon variant, but i'll start by showing the first version as usual then work with your comments. 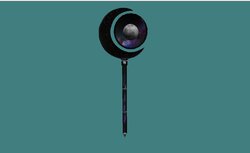 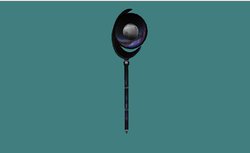 Hah! A sphere that's only skinned on the inside to generate this optical illusion. What a fantastic idea
Very very very nice.

Is that the Milky Way I see as part of the skin though? If so, I'd suggest you pick some other (fantasy) galaxy.
Oh and maybe make the handle quite a bit longer. It seems short, compared to the (awesome, trippy) top of the staff.

Edit: Just noticed you applied the illusion to the handle itself as well. Very nice!

This is fantastic. I agree with both above comments from above, longer staff handle and a new space texture please! Maybe you could find something with a red motif, perhaps some nebula? It would fit well with the dark staff's red beam. I can definitely see the green/red/yellow glow of the summoning ability lighting up the moon perfectly.

It's way more fitting than the currently planned replacement too...

MSC Developer
Warriors of the North 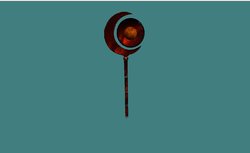 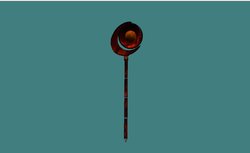 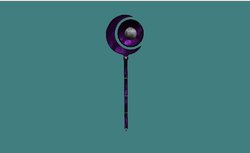 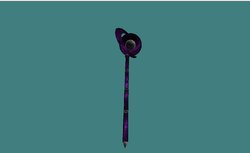 This is really awesome! I think the first one looks the best. It looks like some kind of moon staff which is great because the moon plays an important role in the lore.

The length of the staff looks much better now, but I think the red and purple variants are a bit intense. The first color scheme looks the most appealing to me.

Tbh i would use the dark skin one for a completly new staff, not a replacement for the dark staff.

The purple skin could be the dark staff replacement though, i wouldn't mind seeing that staff twice. In-fact your models are always visually appealing so i'm down to multiple items using the same models with different skins applied to them. This is what i would call making good use of content like this.

When I return home, I will update the original texture and release most of color variants. I will repost in a few hours
M

Imo one additional 'part' added to the handle (you went from 3 to 4, but how about 5?) would be perfect.
And I'm still tripping balls everytime I see one of those videos displaying the illusion :thumbsup:

Could we get a side-by-side comparison with another staff? Like the current darkstaff or the phlame staff to gauge what would be an attractive height for the staff? 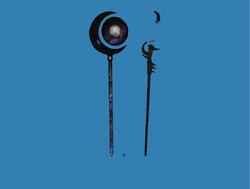 After the very good side-by-side sugestion, I must say that adding a 5th section to the staff makes it near perfect. Also old textures are back and better aligned 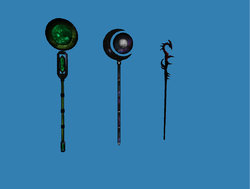 The emerald looks nice but I think the dark staff with the moon looks the best, at least as a replacement for the current dark staff. The emerald one could be something new perhaps.

These all look really awesome! Would love to see them replace some of the stolen staves we have ingame.

Umm... Already replaced both of these.

Alright, I'm downloading it now for real this time, i'll have a look at the models in a moment

Thothie said:
Umm... Already replaced both of these.

If you're interested in creating a base to work with on the "particularly complicated" project, it might be something to chew on. Need a staff with three to five crystal slots as sub models, each crystal having at least five colors as sub models in turn. Staff itself may come in a variety of flavors, though each should have the same crystal/slot system.

End result basically entails slotting crystals in the staff to change the series of spells it emits. Alternative thought was to do the same thing as bracelets with hanging gems, and take more advantage of FER's spell animations, but that might be more complicated.

In terms of things that kinda need to be done sooner than later (rather than an epic task liable to get me sidetracked), still need to get some robed mage/cleric elves. I can provide sources for various robes, and the elves, if you're up for that. Also, our new male elves have no ears - have an alternative head we can use, should tacking on ears from scratch prove too difficult - IIRC there's also a lack of head under those helmets.

The current replacement for the dark staff is really silly. I'd much rather have this cool one than the darksnakestaff.

Awww man, I just spent hours fixing that beam and getting it to come out its mouth.

I suppose maybe we can use one of these and maybe use the fancy snake staff for something else, assuming we get a source for these. I'm really not looking forward to aligning that beam yet again though.

The models are already compilable and the textured depth down to 256. so both models works already. it seems like the work on staff will be larger than I expected let's follow up on our section

It's just my opinion and all, about the new dark staff model. It's a staff with snakes so I feel like it has a pretty obvious use on a certain weapon... COUGH. But the dark staff laser beam coming out of the moon on this model would be pretty sick.

It's an upgrade from that staff, hence why I opted for it, but yes, it doesn't have to be, given that there's no snake theme in the Dark Staff's powers, just an Affliction theme. I suppose we could still use it as a Greater Snake Staff, rather than waste the Wizard Wars staff, but I've no clue what such a staff would do - save make bigger snakes... Dunno if I could use the snake model as some sorta astral projection attack that whips out from the staff and bites things.

Still need to swap Ihotor's and Phlame's staff in their NPC models, and all these other NPC's carrying models we've since replaced - bleh, so much work that. Dun have to do it for the elves at least, they had quite a few (and in Ihotor's case, we've gotta replace the whole model, so probably take care of it then anyways).
You must log in or register to reply here.

Mappers! Get inspired or inspire someone else!