It always kinda irked me that there is no replacement for the goofy and probably framerate eating first person character model, there is an FPS guide on the forum that suggests turning it off anyways. I really liked the plain sprites for displaying what you had in your hands in the original master sword, one of which was highlighted to show the active hand. I made a quick mock up of what it could look like;

The left hand is the currently active hand, as denoted by the green highlight, similar to selecting items in inventory. 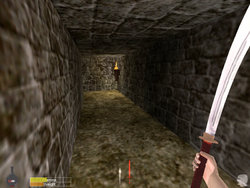 Here is an image for reference to the original hud. I know the highlight is red here but I think green makes a lot more sense.

There could be a variable similar to ms_invtype(maybe called ms_hudtype?) to switch between the large sprites, small, or none at all. I'm sure there must be other players who have at least thought of this idea before?

I do like the top one better, and never was a fan of the ms_lildude implementation (thus tasked Shurik3n with the job of finding a way to turn it off). Sadly, I think it's beyond my capabilities to rig up something like that top system... And I also really wish I hadn't also tasked Shurik3n with the job of swapping out our TGA inventory system for a sprite based one, as it turns out it wasn't fuxing with the media cache after all, and the old system was a whole lot easier to deal with (though I guess the sprites load faster, at least - used to have this long "...Loading TGAs" pause).

Maybe one of our real coders could do something similar. I could *almost* figure something out based on the hud.addstatusicon system, and I know the inventory icon item data is readily available on the client, beyond that, however, I'd fsk it up. Couldn't do it scriptside as the hud sprite functions there can't seem to remove specific icons at the moment - only create timed ones that burn out.

Granted, I've been trying to get our coders to add a simple sound to the charge bar progress for years now, and it seems that should be a much simpler task.

*sigh* I'll add it to the task list anyways, just as soon as my stomach recovers from Christmas dinner. 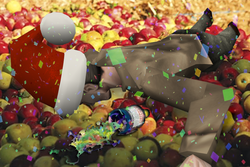 Haha nice. By sound for the charge bar do you mean something that would play as it filled, perhaps increasing in pitch, or a little signal when one bar fills up?

Thinking a quiet blip each time it filled a level. A continuously rising pitch may get a bit annoying, but maybe a rising tone at each new level would be reasonable. Anything to remove this mechanic where your eyes are focused on that tiny charge bar rather than the combat around you.

Would also be nice to have the option to enlarge that charge bar - a request on the same card.

Eh, I've sort of programmed the times into my head for the most part. Timing your next charge after the last is easy when you get into a rythm, but so is chugging a swift blade and taping down your mouse buttons.