Starting an HLDS or listenserver with the -num_edicts flag may lead to crashes on some maps.

Having between 2001 and 2501 totalhp on Deralia Sewers will cause sewer bosses not to spawn.

Demonic Blackhand's on orc_for wield battleaxes yet when they die they drop shortswords.

Keledros and clones not reporting XP on second death

Texture scrambling issues when playing for a period of time

Disconnecting while dead results in invisible body and armor on reconnect.

Some p_models vanishing into floor

Lack of level up sfx for Polearms (for some players)

Ancient/Perpetual
Known Ancient bugs:
- No Free Edict Errors (ED_Alloc:no free edicts), usually the result of overloading the server in one way or another. You can *try* hosting with the -num_edicts flag, however, this may prevent some maps from loading. We're constantly working to mitigate this bug.
- All entities invisible bug (type kill in console to cure).
- Lights/sprites not going away / sticking to other objects (Sticky client-side effects)
- Occasionally a weapon/spell will stop doing damage until it is unequipped then re-equipped.
- Can't use charge attack in laggy conditions. (Work around: use +special or +uber)
- Sitting animation bugs (sometimes saves to character for awhile)
- All water sometimes goes white (texture stretch bug, restart)
- Typing issues in chat. Especially with European keyboards.
- Various Health/mana indicator madness (see also yonder)
- Small sack holds stuff it should not.
- Ticket Bank freaks if you have more than one of the ticket or item you are trying to trade
--> Galat chest does not have this issue.
- Double attack bug, most prominant with xbows
- All tomahawks appear as fire tomahawks in third person
- Heavy/Light Crossbow jamming when firing

Also Not liable to go away soon:
- Some monsters still capable of some acts while frozen (jumping, etc.)
- Orion Bow jamming sometimes, (I've no idea how to fix this without dropping the whole charged weapon concept.)
- Jumping from server to server without closing HL screws with FN functionality (solution: Close half-life before joining another game.)
- Can't push monsters while under the effect of leadfoot potion

Resolved from MAR2011a:
- Level 45 Level Cap Fixed
- Dragon Axe fire breathing alignment
- Galat Wondrous Chest should no longer lock out other players when full. It will also not allow you to attempt to withdraw items when your inventory is full.
- Scrolls will not cast when inventory is full (to prevent their loss).
- Land based monsters can now attack players hiding in water.
- Added crash prevention for item/monster display names and descriptions being too long. (You may see some names or descriptions being cropped off though.)
K

Same here, all of the 2 handed axes I tested have no first charge.

Dragooncaves no longer works at all on my server, tried it with and without num_edicts and crashes with either. It crashes as soon as I try to do anything.

In deraliasewers, the portal that is opened after the forest part seems to be blocked by mummies sometimes, so it can trap players in the spawn point and make us all get killed without being able to move -.-
J

Deraliasewers seems to be extremelly unstable. Been playing most of the day on that map, around half of the runs i did ended up with a crash. Map can crash anywhere, and it seems to be sort of random most of the time...

Meh, I did have to mess with the 2h axe base to fix something... I shall have to figure what I broke in the process...

Why that would be I dun know, not messed with it, but I shall examine.

cartman-2000 said:
Dragooncaves no longer works at all on my server, tried it with and without num_edicts and crashes with either. It crashes as soon as I try to do anything.
Click to expand...

BAH! >< Will look into... May need to recompile the bugger, apparently it is in that "magic zone".

If you are determined meantime, however, it should work okay on a listenserver.

This should not be an issue. Seem to be getting plenty of poison clouds in the water with no issues there. Granted, I completely re-wrote the NPC poison cloud script and changed the methodology awhile ago.

The PC poison cloud remains the same - but I don't think it ever caused such crashes, and there's little to no reason to cast one down there. ^_^


zeus9860 said:
Deraliasewers seems to be extremelly unstable. Been playing most of the day on that map, around half of the runs i did ended up with a crash. Map can crash anywhere, and it seems to be sort of random most of the time...
Click to expand...

Then again... Of the five runs with crashes I've seen though, they all seem to happen at the start of, or just past, the forest level, is this also your experience?

I was worried the map was going to be too large to be stable. I also have no idea how VHLT has tweaked the memory layout of the BSP.

Specifically i got many crashes on the sewer part (around the sewer boss section, while fighting the venomous bones abomination), if im not mistaking i got 1 crash in the forest section... and the worst part is the spawning area with the slimes. Every 5 runs we attempted, only 1 was successfull to finish when the map decided to go crashy in spawn for no apparent reason, which made JM post that poison cloud stuff, which also seems to not be the issue since i saw many of those in the water but noticed no side effects while they were in the water.


Also i'm not sure about this one report im going to do but, i think the stun wave or w/e it is from the new blunt weapon, doesn't seem to work quite often. Isn't the wave meant to stun surrounding targets and deal lil damage to them aswell? I've tried multiple times, on various npcs. Sometimes the stun wave stunned a target, sometimes it didnt do anything at all (which seems to happen most of the time with me). So i have no clue what's going on with this hammer, really.

You do have to hit the ground with it, which can be a bit tricky, if you have an NPC right in front of you, absorbing the blow.

If it's generating the wave but "missing" NPC's, it maybe I have to place the origin of the wave and scan point a bit more off the ground to deal with terrain.

It's also doing AOE damage and an AOE scan in the same frame - I think that's caused issues in the past...


In regards to Deraliasewers, I did have issues with the opening slimes causing crashes sometimes (none of which make clouds, but there's quite a few of them). That's why there's a rather lengthy delay before they show up. Maybe I should just axe them, or reduce it to one or two... None of those generate poison clouds though. I think those spit projectiles are a bit resource heavy too (breaking into sprites and such). It's worth noting that said slimes don't count against the level average when figuring treasure, so you can freely kill them while you wait for other players to connect.

Yeah, seems a bit tricky to work with the stun wave. As far as i remember, the wave is shown in screen perfectly but the effects aren't always working. It's basically a stun wave that might miss their targets...
Anyways i shall test some more tommorow evening, see if i notice anything else.

Currently I'm recompiling Dragooncaves with standard ZHLT - hoping that SHLT did something to put it "just a little off".

This is the first time we've gotten this error without -num_edicts on a non-sprite-flooded map, so I am worried though. Something be up.

edit: Also, figured out what the Tomahawk problem is - wrong model in the p_model... Apparently this has been going on since DEC2010... Trying to find an archive with the right model still. >< (May just have to recreate it.)

edit2: And fixed the axe charge...

Meh, the ZHLT compile of Dragooncaves also fails... Hrmm... What do...

edit: Hey, the VHLT version works! I knew there wasn't a reason I hadn't deleted that thing in a rage... Now I just wish I knew why this crap happens at all. It... Screws with the lighting a bit, but not too terribly.

Hrmm... I gotta ask MiB if our FN hash system can handle two versions of the map before I put it out though.

Here's a fix for Dragooncaves:
DragoonCaves
Either version will work on FN, however, clients with different maps will get the usual Map Doesn't Match Server's error.

Got a weird bug on the_wall... So i got 3 of the 4 elf heads, i go back to spawn to deliver azura's head just to find out that Velend stole all my 3 heads (azura, ulectrah and ivicta) and i got this weird message on my HUD saying "You can't afford the payment of Azura's head". I didn't get any rewards from azura's head, instead all of my heads went poof.

Sounds more like an FN hickup than a map/script error. Tested it over a couple of runs on the DS with no issues. Give me a heads up if it happens again. The only real difference between the old script and this one is that Velend doesn't automatically do his intro on the second map. 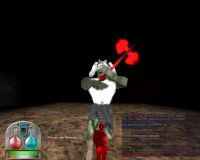 What's wr... Oh, wrong axe... Hrmm... Orcs seem to have picked up some submodel scrambles - too many submodels on said model... :\ Will have to figure something out. Combining subsets somehow, or splitting the model into two.
J

Part of MS:C's charm is the small amount of near-inexplicable bugs that pop up every patch, so I'd say its intentional

Meh, this particular bit of charm has been going on for a few patches now. Stupid engine can't keep complex submodel groups straight, and we added some more submodels to the orc back in January, me thinks.

Possibilities are some creative submodel merges, or splitting the model into two.

Also, sometimes the action animations wont work when you switch from map to map. It looks like it isn't listed in the Ancient/Perpetual bugs section, so I would assume that it is unknown.

If you mean like sit/stand etc... There used to be a silly quest flag that tracked if you were sitting or not, and it'd sometimes "stick" between maps, but I'm fairly certain we did away with that, unless there's something going on code side too. Hrmm....

BY THE WAY! I am itching to know what did the "Torn piece of paper" read.

Cut off by the desc limit, I assume... Reads "parrot, violin, sleep" which are the wrong answers anyways. >_> Will fix.

(Actually, I was looking in MSC 1.0 scripts - they are right in the current scripts, but again, desc too long, will fix.)

Tempted to use the Venevus note model to make something nicer, but effort.